When you’re recruiting a communications professional, it pays to look under the hood of their CV. While it’s brilliant to see that they’ve worked for notable brands and even on specific campaigns, picking apart their philosophy on communications tactics and strategy means looking for times they’ve been tested.

In a few months’ time, that’s going to mean asking one inevitable interview question: “what was your approach during the pandemic?” And at this point, the answer you’re probably looking for is that they played it simple and straight.

The word “pandemic” is the clue: this is about everyone. And, unusually, it’s not just about everyone in a company, region, country or industry – it’s the whole world. For communications professionals used to segmenting their audiences and tailoring messages, this creates an unusual opportunity amidst myriad challenges.

In these early stages of a crisis, when we’re still trying to work out what business as usual is going to look like for the next few months, one of the ways to keep things on track could be a more unified, open and transparent approach to messaging.

The rationale is simple: at this point, everything we can reliably communicate is as relevant to one audience as any other. Everyone is adapting day by day, and that means messaging to employees, customers, investors and other stakeholders can be a lot more standardised. Overcomplicate or finesse your messaging too ‘cleverly’ and things can go wrong.

But asking that interview question in a year’s time will show you other things about a communications professional – not just that they understand that value of simple, consistent, unified messages.

For example, at times like this communications has to be well-aligned with operations. Great communications people are under the skin of on-the-ground realities and their messaging is both credible, useful and reassuring as a result. Trying to spin, especially different messages to different audiences, will catch up with you – fast.

And they know that you can’t say nothing when you’re in a pinch. Right now, things are changing so rapidly – and the situation is so serious – that everyone needs to be in the loop in some way. The messages must be simple and clear (the government has certainly learned that lesson) even if the situation isn’t.

Just one example of this unified messaging – and there are lots – is Adidas. Here’s an email the company sent out on 20th March 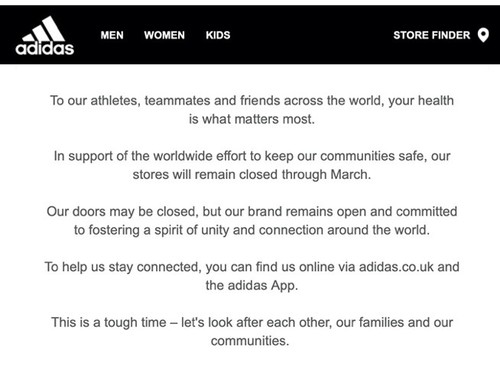 Five sentences that are as relevant to the customer as they are the employee, the supplier or the shareholder. When the fine details are unknowable – we can’t say when isolation will end, we don’t know how this will change society – finding unified (and unifying) messages is not just the smart move, it’s the right move.

The other benefit to a more open and transparent approach is that it builds trust at a time when people are desperate to be reassured. When the messaging is consistent, positive and proactive, any of the key audiences can pick up on it and feel more confident.

There will come a time when more tailored messaging comes back to the fore. Investor relations, for example, is likely to become much more specialised once the markets find a sense of equilibrium. But right now, analysts are no more interested in finger-in-the-air earnings forecasts than customers.

If we’re all going to find that new business-as-usual in the next few weeks, the path is calm, clear, reassuring and positive communications delivered without spin. When you’re recruiting communications people – now, or when things get back to some version of normality – knowing they’ve been able to deliver well-aligned, unified messaging to a range of stakeholders will be a massive tick in their favour.